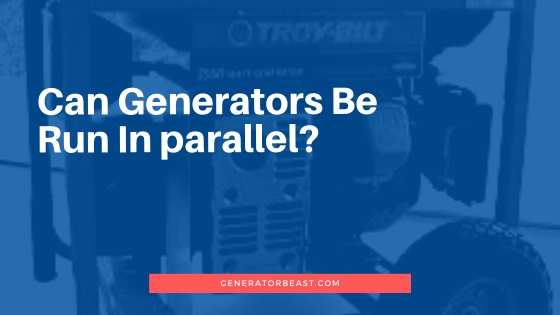 Even though portable generators are versatile and fuel-efficient sources of power available to us, many of them might not be strong enough to start and run a 15,000 BTU air conditioner. So, this is where paralleling can be really helpful.

When multiple generators are paralleled together they are able to serve emergency and business-critical loads, especially for system response time and dynamic load response once in operation in a more better way.

The parallel operation of multiple generators provides greater reliability in comparison to a single generator unit for critical loads. Let’s say if one unit fails, the backup loads are redistributed among other generators in the system.

Paralleling generator is a much more efficient system as it provides more stability and reduces cost and losses. Besides that, Parallel systems ensure scalability and modularity that enables variations in load over time and optimum operation of the installed units.

If your one big generator malfunctions, you are not going to have other backup options on-site to take over the electrical load. It will take a lot of time or days to get a replacement generator.

However, if you are using paralleled generators you have the ability for generator redundancy. The cool thing is that if you have a generator fail, the controller in the other generators detects the increase of load, and carries the excess load over to the remaining generators. Due to this the company never loses power.

Why generators are connected in parallel?

Generators are connected in parallel to increase the power output. Apart from that, there are many other benefits of paralleling. For instance, if one generator malfunctions the supply of power will not get disrupted which means that if something goes wrong in one generator, the flow of power can be continued by other healthy units.

No, you can only parallel two identical units together. If you want to know how to parallel two Honda generators click here.